Over the past two months, there have been many events that have globally influenced geopolitical processes. After a while, it can be argued that the world as we knew it ceases to exist, and already at this moment there is a global redistribution of the economy, spheres of influence, and separation of parts from a common whole. And there is every reason to believe that Bitcoin and cryptocurrencies will take an important place in the new world order.

Let’s start our chain with the distant coronavirus crisis, which provoked the unprecedented dawn of the crypto market and the stock market. Thanks to the US government’s quantitative stimulus program, record levels of liquidity flooded the market. The crypto market has set a new record market capitalization of around $3 trillion. Bitcoin also set a new historical record near $70k, many altcoins also managed to update ATH. However, this subsequently led to a record inflation growth in the United States at 7.5%.

In this regard, the FOMC announced a tightening of monetary policy and more difficult access to liquidity. As of April 14, the key rate was raised by 25 basis points, but the inflation rate exceeded the most pessimistic expectations and reached 8.5%. This happened because of the war in Ukraine and subsequent sanctions against the Russian Federation. The FOMC expectedly said that the rate will be raised at an accelerated pace in just nine months. The FOMC believes this will save jobs and offset high energy prices. Despite the general positiveness laid out in the report, the department is closely monitoring the economic consequences of the war and takes appropriate decisions. This suggests that the current Fed monetary policy may be revised. 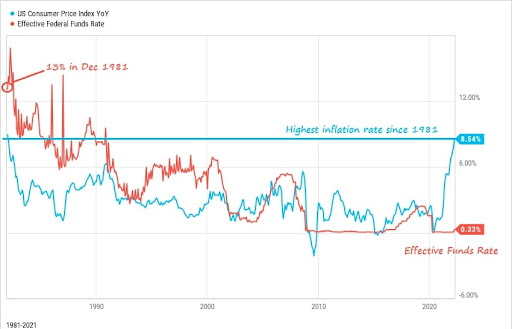 The inflation of USD to March 2022

The market greeted the previous FOMC meeting positively, as Powell’s department by its actions announced a liberal approach to tightening monetary policy. But the situation changed at the end of March when it became clear that inflation could not be stopped. This changed the attitude of investors, who once again began to withdraw capital from high-risk assets like stocks and cryptocurrencies.

The future increase in the key rate will still have a painful impact on the stock market, which grew by 200% of US GDP during the coronavirus crisis. But given the correlation between the market and cryptocurrencies, the quantitative reduction program will hurt the crypto market as well. It is important to understand that the FOMC policy is aimed at strengthening the position of the US dollar, mortgage, and Treasury bonds, which are the foundation on which the American currency is based. And here comes a significant and long-term crisis problem for the USD. It is connected with the war in Ukraine and Western sanctions.

The global investment community was shocked by the ease with which the West froze all dollar assets of the Russian Federation. Despite the fact that more than 60% of government reserves are backed by USD, this was a severe blow to fiat’s reputation as a safe and reliable medium. The same applies to gold: US sanctions do not allow the Russian Federation to dispose of or sell the gold and foreign exchange reserves in any way. In such a situation, large companies and sovereign wealth funds understand that the classical reserve system in US dollars and gold has cracked. So it’s time for new players.

In such a situation, the main cryptocurrency can become a very important market asset that will replace USD and gold in the long term. Obviously, the market will need time, as the US has just launched the process of developing and implementing a legal framework for regulating cryptocurrencies. But later on, you can be sure that BTC is able to surpass the main reserve currencies and become a safe financial instrument. Blockchain technology is able to ensure the security and anonymity of transactions, and the emission limit allows the asset to maintain high demand even in a liquidity crisis. The only problem is that the investment community is at the initial stage of reassessing its attitude towards Bitcoin. 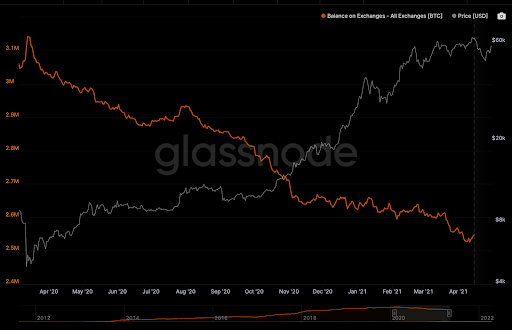 At the current stage, the main task of Bitcoin is to create and confirm its reputation as a safe and profitable savings tool. Large investors continue to accumulate the asset, so the first steps in using BTC as a reserve fund are already being used. Despite this, investors need to make a clear choice: to use the asset as a high-risk instrument and thus bury Bitcoin as monetary policy tightens. Or use it in a new capacity on an ongoing basis.

As of April 14, BTC/USD remains highly correlated with stock markets and SPX. This suggests that Bitcoin is currently regarded as a high-risk asset that will lose popularity as monetary policy tightens. We see that on the daily timeframe the price managed to defend the $40k mark. But technical indicators point to weakness and short-term momentum. A significant part of the market continues to actively accumulate BTC coins, which indicates the emergence of a trend towards the use of crypto as a savings tool. But if the price fails to recover above $45k, this trend may subside. 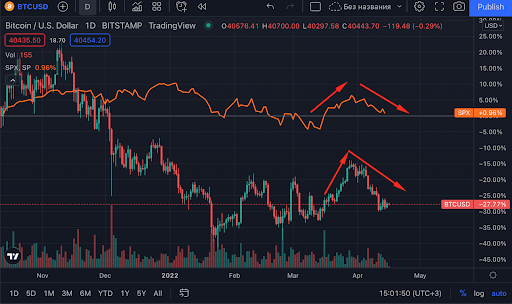 The state of the altcoin market in April 2022 is completely dependent on the first cryptocurrency. The level of Bitcoin dominance is in the region of 41%, and this does not allow the altcoin market to grow in price without the influence of BTC. Despite this, many cryptocurrencies have not lost their value and continue to actively develop ecosystems. Ethereum, Solana, BNB, and Cardano continue to improve existing services in the DeFi market. XRP is close to winning a legal dispute with the SEC but is actively expanding in the field of cross-border transactions. But in general, what applies to the altcoin market is fully applicable to Bitcoin. The fundamental background plays a key role and everything that happens depends entirely on geopolitical and macroeconomic factors.

In general, it is necessary to state the fact that global and financial disasters have a positive impact on the adoption and development of digital assets. But in the current environment, the crypto market will meet resistance in the form of FOMC and USD. Now the cryptocurrency market is actively adjusting to new realities, but investors are reacting weakly. This suggests that the adoption of digital assets has accelerated due to fundamental factors, but in the short term threatens the market with the formation of a new local bottom.

At the same time, the FOMC announced the start of the quantitative reduction program in June. This means that until then, most of the liquidity in the stock markets remains. This is a chance for cryptocurrencies, to reorient in the eyes of investors and become a guarantor of the safety of capital. Bitcoin is showing positive accumulation dynamics, but the market will likely want to buy below $40k. This suggests that shortly the crypto market will approach a significant shortage of liquidity and updating local minima.

What drives the price of cryptocurrency

It is no secret that cryptocurrency prices are volatile. Prices can swing wildly up and down in a matter of hours or even minutes.

Finally, another factor that can drive the price of cryptocurrency is government regulation. If a government announces that it is going to start regulating a certain cryptocurrency, that can have a positive or negative effect on the price, depending on how the regulation is viewed by the market.

What would cause Bitcoin to crash

Bitcoin is often hailed as a revolutionary new technology that will change the financial world as we know it. However, there are also those who believe that Bitcoin is a bubble that is destined to crash.

There are a few potential causes of a Bitcoin crash. One is if there is a sudden increase in regulation by governments around the world. If governments start cracking down on Bitcoin, that could lead to a sell-off by investors and a crash in the price.

Another potential cause of a Bitcoin crash is if there is a sudden decrease in demand for Bitcoin. This could be caused by a number of factors, such as another cryptocurrency taking over the market, or a general decline in interest in cryptocurrency.

Finally, another potential cause of a Bitcoin crash is if there is a major hack or security breach of a major cryptocurrency exchange. This could lead to a loss of confidence in Bitcoin and a sell-off by investors, leading to a crash in the price.